On this page, you can find research tools that provide an overview of the available data as well as detailed information on how to use the SHP data.

We always recommend to start out with our user guide that covers most of the questions both beginners and more experienced users might have. We also have a complementary user guide for the users of the pilot study of the SHP IV, the LIVES FORS Cohort, the SHP LIVES Vaud as well as the Covid-19 Study.

All the documentation as well as our questionnaires are available on FORSbase.

About the Swiss Household Panel

The principal aim of the Swiss Household Panel (SHP) is to observe social change, in particular the dynamics of changing living conditions and representations in the population of Switzerland (Tillmann et al. 2016). It is an annual panel study based on a random sample of private households in Switzerland over time, interviewing all household members mainly by telephone.

The SHP constitutes a unique longitudinal database for Switzerland and is supported by the Swiss National Science Foundation. The survey covers a broad range of topics and approaches in the social sciences. Data collection started in 1999 with a sample of 5’074 households containing 12’931 household members. In 2004 a second sample of 2’538 households with a total of 6’569 household members was added; and since 2013 the SHP contains a third sample of 4’093 households with 9’945 individuals. Response rates have remained high in all three samples.

The data from the Swiss Household Panel is freely accessible to the scientific community on FORSbase (see data).

Since 2013, the SHP team also conducts the LIVES FORS Cohort Survey as well as the SHP LIVES Vaud in collaboration with NCCR LIVES and the canton of Vaud.

Weighting
Weighting in the SHP

Weighting in the SHP LIVES Vaud

Naming conventions and overview of the weights

Some remarks on the use of weights

Collection, construction and plausibility checks of income data in the Swiss Household Panel

Family typology
Sandrine Morel from the University of Lausanne has created a new household typology that takes account of the diversity of families in Switzerland (single parents, unmarried parents, blended families). The new variable identifies whether children are from the current relationship, a previous relationship, or from both.

Use the SPSS-syntax for the year 2018 (wave 20) or adapt it to your needs. For questions please contact Sandrine Morel.

SPSS
How to merge SHP-files with SPSS
Stata
Stata basics 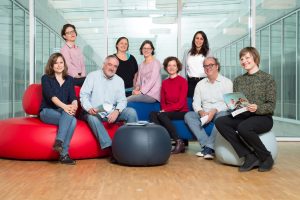 For further information, please send us an e-mail:
swisspanel@fors.unil.ch

Click here to learn more about the staff of the Swiss Household Panel and to contact us individually.

The SHP in a nutshell 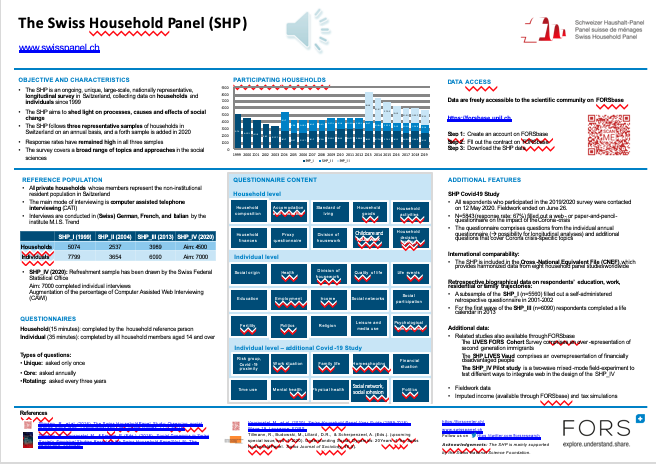